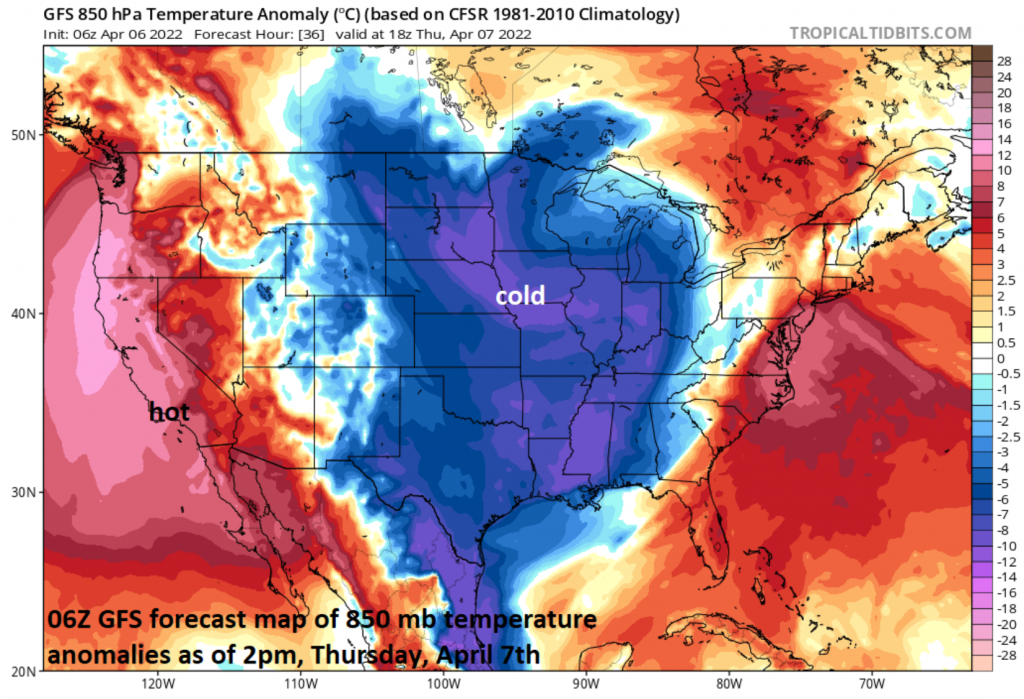 Baseball’s “Opening Day” on Thursday will feature plenty of colder-than-normal air across the middle of the country and an unusual hot air mass across southern California. Map courtesy NOAA, tropicaltidbits.com

It’s time once again to “Play Ball”…at least the openers are on the schedule for many cities on Thursday and an additional bunch of locations on Friday.  The weather is not being very cooperative, however, and there have actually already been a couple of postponements for games originally scheduled for Thursday afternoon. An active weather pattern across the nation will bring about numerous showers and cool conditions on Thursday, Thursday night and Friday in the northeastern quadrant of the nation, winds will remain quite strong in much of the nation’s mid-section, and excessive heat will be a factor for baseball being played in southern California. Looking ahead, there appears to be a flip in the temperature pattern coming to the nation next week with warmer weather on the way for the eastern states and colder conditions in the western US. 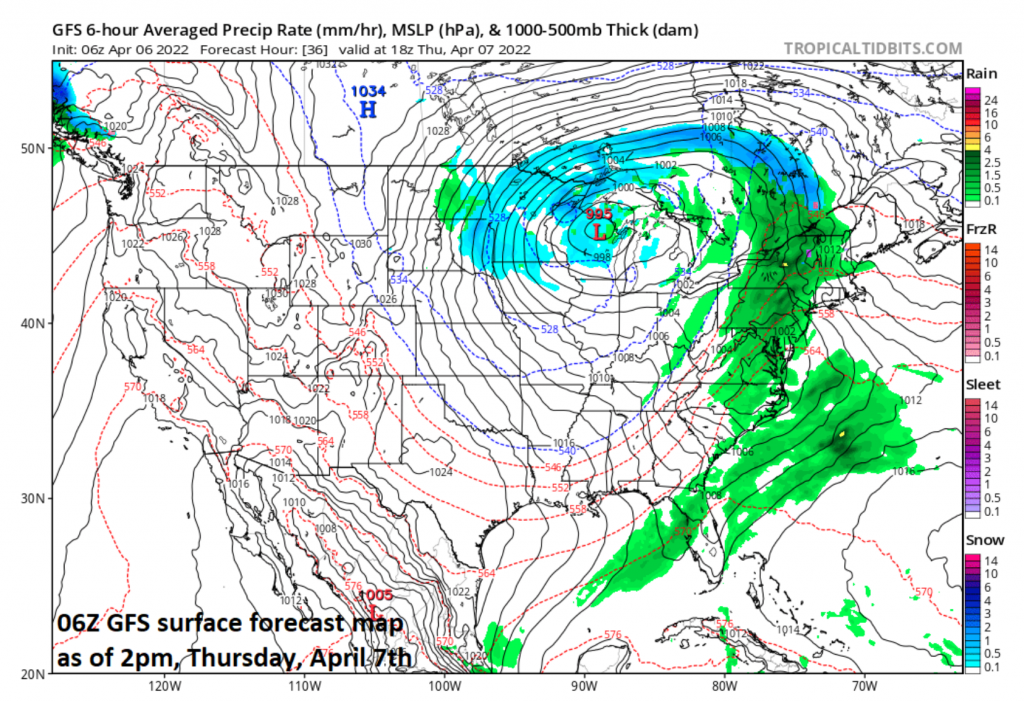 An incoming cold front and a developing low pressure system will result in more rain on Thursday and Thursday night across much of the eastern third of the nation. This inclement weather outlook has already resulted in a postponement of the Yankees home opener in New York City on Thursday afternoon to Friday. Map courtesy NOAA, tropicaltidbits.com

It has been just over five months since the Atlanta Braves wrapped up the 2021 World Series with a victory over the Houston Astros on November 2nd and securing a win in the series 4 games to 2. The subsequent off-season featured a work stoppage and this resulted in a significantly delay and shortening of spring training in Florida and Arizona after a settlement was reached.  It is now time to begin the regular season for 2022 with several opening games scheduled on Thursday and a bunch of additional openers planned for Friday.

A large-scale upper level trough of low pressure will slide across the Upper Midwest on Thursday and create unstable, chilly conditions. This inclement weather outlook has already resulted in a postponement of Thursday’s home opener in Minneapolis between the Twins and Mariners. Map courtesy NOAA, tropicaltidbits.com

The weather is not being very cooperative, however, and there have already been two postponements of Thursday’s games in New York City (Yankees versus Red Sox) and in Minnesota (Minneapolis) where the Twins were to begin the season against the Seattle Mariners.  The Yankees home opener has been postponed to Friday due to a threat of rain on Thursday afternoon and the Twins home opener has been pushed off until Friday due to expected cold conditions along with the likely combination of rain and snow. Elsewhere, the Washington Nationals are scheduled to begin their season at home on Thursday afternoon against the Mets and cool conditions and showers are likely to be a factor. In Chicago, the Cubs home opener is in jeopardy as it’ll be windy, cold and showers are quite likely. In all areas from the Upper Midwest to the Mid-Atlantic/Northeast US on Thursday and Friday, the relatively cool weather will have a tendency to suppress the “Home Run Forecast Index” and weather will be somewhat unfavorable for a baseball to carry.

Elsewhere, in the nation’s mid-section, high winds have been a problem during the past 24 hours and the Kansas City Royals home opener on Thursday afternoon may feature 40 mph wind gusts and cool conditions as they battle the Cleveland Guardians (formerly the Indians). As is the case up to the north, these kinds of weather conditions will tend to suppress the “Home Run Forecast Index” and will be somewhat unfavorable for the balls to carry.  Meanwhile, in southern California, the weather has been and will continue to be unusually hot.  In fact, temperatures could climb into the middle 90’s for the Angels home opener on Thursday afternoon in Anaheim and these conditions will like produce a high “Home Run Forecast Index” and favorable conditions for the balls to carry. One final note, the world champion Atlanta Braves will have no problem weather-wise with their planned home opener; however, winds will gust to 30 mph or so and likely be a factor on the heels of a strong cold frontal system. 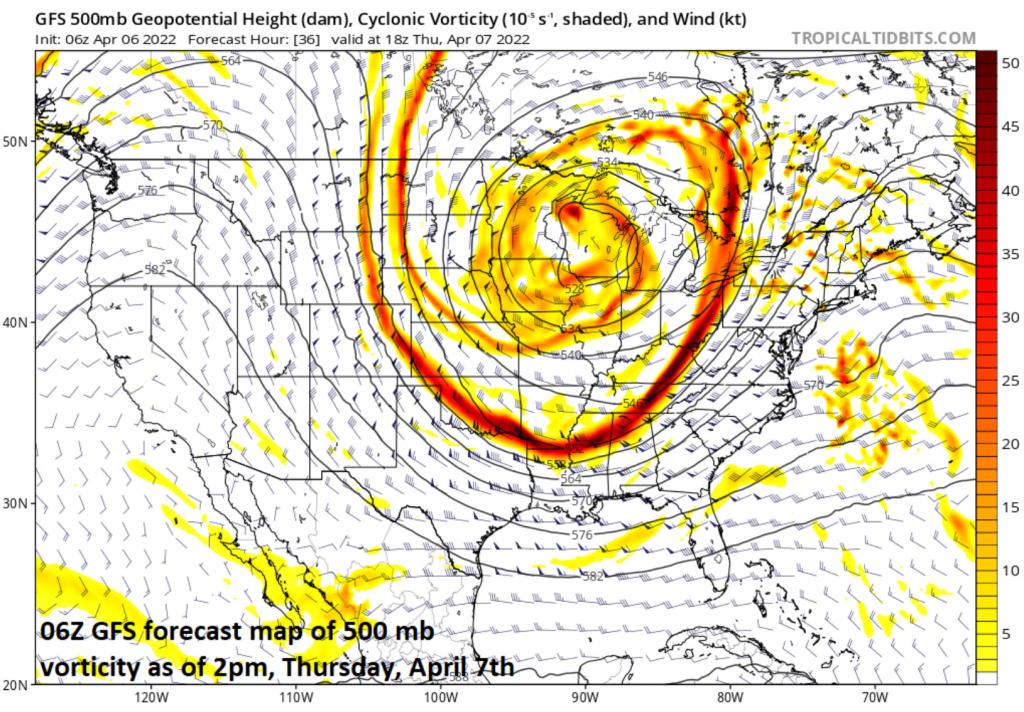 The large-scale upper-level trough of low pressure will shift towards the northeastern states on Friday likely resulting in shower activity for the eastern Great Lakes, Mid-Atlantic and Northeast US during the afternoon and evening hours. This instability in the atmosphere and threat of showers could end up being a factor in the Phillies home opener on Friday afternoon against the Oakland A’s and also for the Tigers home opener in Detroit versus the White Sox. Map courtesy NOAA, tropicaltidbits.com

In terms of the weather, one storm system is moving away from the Mid-Atlantic/Northeast US today, but a strong cold front will bring additional rain to this part of the nation on Thursday and Thursday night along with the possibility of a thunderstorm or two.  Low pressure will form along the incoming cold frontal system near the east coast on Thursday and this will enhance the rainfall and bring it to a large part of the northeastern states.  On its heels, a large upper-level trough of low pressure will slide across the Upper Midwest on Thursday to a position over the northeastern states from Friday into Saturday.  With cold air aloft and the deep trough of low pressure, it’ll become quite unstable later Friday and showers are quite likely to break out in much of the Mid-Atlantic/Northeast US.  The Phillies home opener is set for 3pm on Friday afternoon and showers are a threat as instability in the atmosphere will increase the chances for some rain later in the afternoon and into the evening. The cool, unsettled conditions will continue into the day on Saturday across the northeastern states with the upper-level trough nearby – likely limiting the ability of the baseball to carry well. 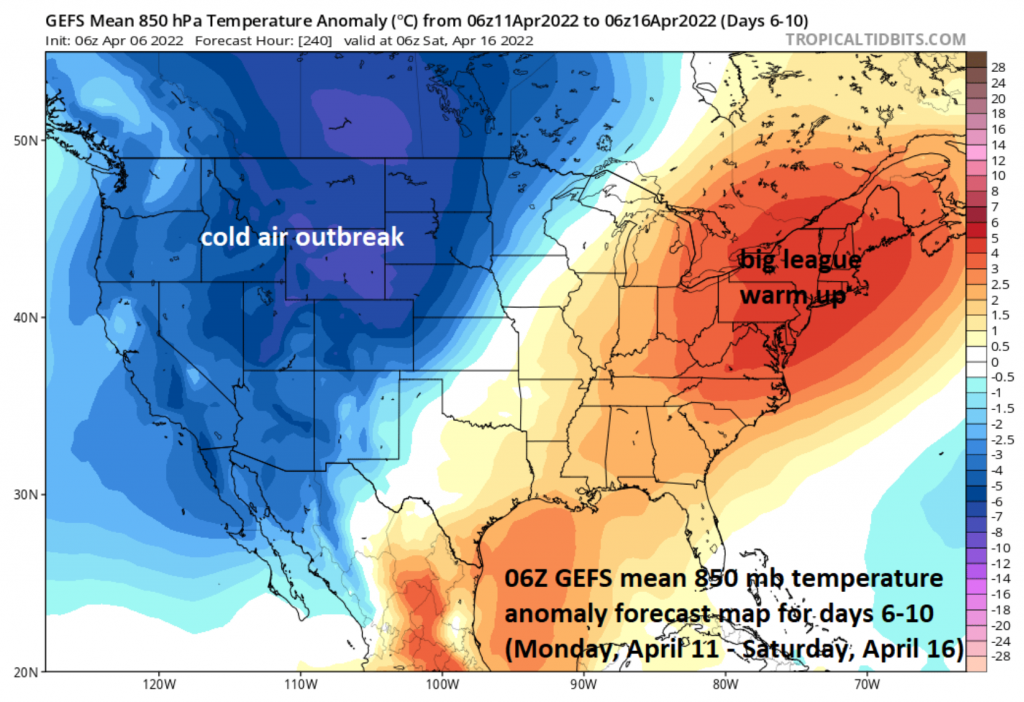 The nation’s overall temperature pattern will flip next week to one with colder-than-normal conditions across much of the western US (including southern California) and warmer-than-normal in the eastern third of the nation. Map courtesy NOAA, tropicaltidbits.com

Looking ahead, more favorable weather for baseball will develop next week across the eastern third of the nation as a “big league” warm up is on the way. At the same time, however, it’ll turn colder-than-normal in the western states and this will result in a dramatic change for southern California where the opener on Thursday could feature temperatures in the 90’s in Anaheim for the Angels opener against the Astros.