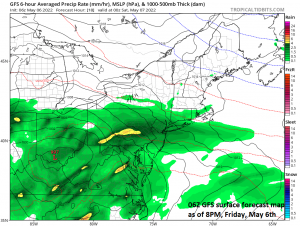 A soaking rain event is coming to the Mid-Atlantic region for today, tonight and Saturday and it’ll become quite cool and windy as well. Intensifying low pressure will cross over the Ohio Valley on Friday and then – as it arrives the eastern US – it will begin to become influenced by building high pressure over southeastern Canada. As such, the low pressure will slow down in its advance to the east and ultimately will stall-out over the western Atlantic Ocean. The “blocking” type pattern that sets up in the upper atmosphere could prolong the chilly, damp weather into Sunday, Mother’s Day; especially, along coastal sections of the Mid-Atlantic. Later next week, the strong block will likely result in a retrogression of the stalled-out low pressure system and it likely moves from east-to-west and back to the east coast – perhaps re-classified as a “sub-tropical” system. 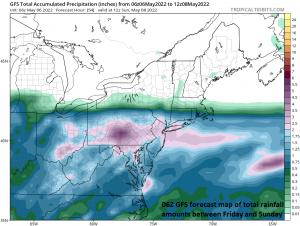 As a result of this slow-moving strong storm system, several baseball games are in jeopardy of postponement on Friday including those in Philadelphia, New York City (Yanks), and Baltimore. In addition, Friday night’s scheduled games in Cleveland, Cincinnati and Chicago (Cubs) are also threatened as the precipitation shield from this storm system will extend all the way into the Midwest.  On Saturday, many games in the Mid-Atlantic region will be threatened by additional rainfall which will continue to be heavy at times.  Temperatures will drop to well below-normal levels in the Mid-Atlantic region during this rain event and the “Home Run Forecast” index will tend to remain on the low side (1, 2, or 3).